I like to browse the web and read literotica when I’m bored and alone and wishing I wasn’t, but I can’t seem to find someone at the moment.

One of the storylines I've always fancied is the couple who go into the bar to pick up a stranger and take him home. I don’t know why I like that idea. I don’t really have the guts to do it. I usually prefer to know something about a lover. But I sometimes think about the idea of that zipless fuck with some great looking guy, and the bar pickup stories always pull me in.

So, one day I decided to try it, or at least the next best thing. I also wanted to use this as a way to thrill my husband. It’s been some time since I surprised him.

I met a guy named Mitch about two months ago at a company seminar. He works at a branch office about two hours away. We hit it off, and I had my eye on him as someone I would be interested in. I just wish he weren’t so damned far away. I started to email him and I let him know that I would be interested on a personal level. We’ve been writing back and forth and have hit it off.

He knows I’m married but I told him it was okay because my husband and I have an understanding that gives me a lot of freedom. He didn’t ask any questions. I asked him if he wanted to come up for the weekend. I told him I would meet him at a local hotspot, but when we met he needed to act like we had never met before. He agreed and we set it up for Friday night.

That Friday I told my husband that I wanted him to watch me do something. When he asked what, I told him I always wanted to pick up a complete stranger in a bar and take him home and fuck him. I thought his jaw would hit the ground!! I explained that it was something I always wanted to do and I wanted him to watch me when I did it. I told him to go to the club on Friday night and wait for me, but to only watch and not to approach me.

My husband got there first. When I arrived I saw him at the far end of the bar, sitting alone and milking a cocktail. I sat at the other end of the bar, where I could see the door. I was dressed for the night and had to refuse several men soon after I arrived, but I let them linger long enough to make it interesting for my husband. About 20 minutes after I arrived Mitch walked in. I was able to catch his eye and he headed my way. He looked at the seat next to mine and asked if he could sit beside me. I nodded for my husband’s benefit and Mitch slid in beside me.

We talked and smiled and drank for the next hour. Occasionally I would glance toward my husband, watching for any reaction. He was trying not to stare but I knew he was watching every move. Then I told Mitch I had to go to the restroom and excused myself. When I walked past my husband I slipped him a note I had already prepared (assuming things would go well):

When I came back my husband was gone. Mitch and I finished our drinks and I invited him back to the house. We went straight there, and straight to the bedroom. I tried to undress him but he insisted on undressing me. Then he practically devoured me before taking me roughly. It was great sex even without knowing that my husband was watching. Mitch took me no less than three times that night often going non-stop for 15 or 20 minutes at a time. His stamina was amazing and I was crying and screaming. At times I didn’t know whether to beg for more or beg him to stop. Finally he was finished. I was almost relieved. We laid in bed for awhile talking, and made plans for the next night. He left the house about midnight.

My husband was in the bed as soon as the front door was closed and locked. Like Mitch, he practically attacked me until I was exhausted. It was a great night for everyone. I still don't know if I could actually pick up a stranger in a bar, but my husband thinks I did and THAT'S just about as much fun!
Posted by Jennifer at 10:32 AM 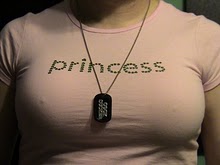